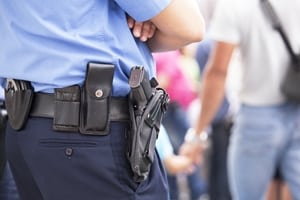 Former police-union president Brian Wurts and the Lakewood Police Department just reached a $150,000 out-of-court settlement over a wrongful termination suit that had been ongoing for much of the past year.

Back in 2012, Skeeter Manos, the union's treasurer and secretary, was arrested for embezzling over $100,000 from a memorial fund set up for four officers killed in the line of duty in 2009. Wurts was placed on leave the following day, and his employment was terminated in December of 2012.

According to the Lakewood Police Department, Wurts knew about Manos' embezzlement, but failed to act on it. Police Chief Brett Farrar said in a statement on the matter that internal affairs investigations "supported the conclusion that [Wurts'] conduct facilitated the theft and fraud committed by Skeeter Manos."

Wurts and his attorney planned to argue that the actual causes for his termination were his union activities, his criticism of Lakewood officials and his sexual orientation. The police department in turn countersued him for fraud and unjust enrichment. The two sides settled outside of court before the start of a planned trial.

While the settlement document is available to the public, neither the city nor Wurts wants to initiate its disclosure. In a statement from the firm representing Lakewood, however, the settlement was described as one that "both sides considered fair."