‘The Walking Dead’ lawsuit could lead to multi-million damages payout 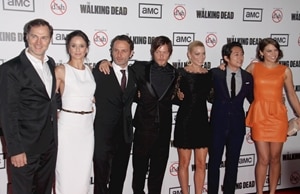 Back in December 2013, Frank Darabont, the creator of the hit apocalyptic TV show, 'The Walking Dead,' and his representation at Creative Artists Agency (CAA) filed suit against AMC, claiming that the network wrongfully terminated his contract, before later filing a second complaint accusing AMC of decreasing his share of the show's profit without any prior notice.

He was fired "without cause, without notice, without explanation, and without any opportunity to cure," according to the original suit.

In the case's latest development, Darabont's lawyers submitted an amended complaint at the end of July, claiming that AMC has continued to withhold shares from the plaintiffs. Given that the show has already reached its fifth season with no sign of stopping any time soon, and has spawned a spin​off, 'Fear the Walking Dead,' the potential value of the claim has increased considerably.

On top of accounting for the show's continued runtime, the revised claim also changed part of the case's original language, alleging that the network replaced the word "instead" in the original contract to a "nonetheless," and using that change as justification to get rid of Darabont.

As a final note, the revised claim contests compensation regarding the spinoff "Fear the Walking Dead," which AMC is calling a "companion series," terminology that falls outside of the "spinoffs and derivative series" in Darabont's contract that entitle him to profit shares.