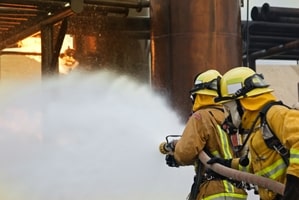 A settlement has been reached in a wrongful death lawsuit following a natural gas explosion in Kansas City. A 46-year-old waitress at JJ's restaurant died in the blast on February 19, 2013.

The explosion occurred when a work crew from the Heartland Midwest company was laying conduit for Time Warner. The area was labeled with incorrect utility markings, causing the crew to drill into a gas line outside of JJ's restaurant. The accident was reported, but an hour later the restaurant exploded. Firefighters surmised that the explosion was the result of a pilot light igniting the fumes from the gas line.

The 46-year-old was the only person to die in the accident.

"We miss her dreadfully and hope that all of this will result in better regulations, and following those regulations, so there are no future [victims] to be lost," the woman's 73-year-old mother told the press.

The wrongful injury lawsuit filed by a restaurant sous chef has also been dismissed by all parties, indicating that a settlement was probably reached.

If your family has suffered a wrongful death or injury in the workplace, you can turn to the Kansas City attorneys at The Meyers Law Firm. These local, experienced attorneys can help you seek justice for your loved one and ensure that you recover any damages to which you are entitled as a result of company negligence.