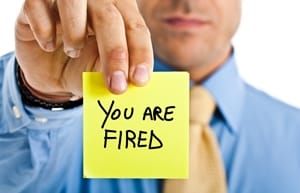 Much as we may dread being fired or laid off from a job, it's unfortunately a fact of life and can occur more frequently than not depending on how stable your particular industry may be. But if you've been handed a pink slip recently, knowing the difference between a wrongful termination and a lawful one is key. If your case leans more on the former, you may be owed damages for lost wages or even reinstatement to your job.

To that end, we've recently begun profiling some of the biggest red flags indicating whether your firing was legal or one that could be grounds for litigation. Last week we touched on how broken promises made by an employer could lend themselves to a wrongful termination lawsuit. In this post, we'll focus on violations of public policy.

Unfortunately, there have been plenty of cases where employers fired a worker simply for adhering to their own lawful responsibilities. These can include, but aren't limited, to:

Because these instances represent a violation of federal or state employment law, being fired for any of the above reasons could entitle you to launch a wrongful termination lawsuit against your former employer and seek either damages or reinstatement.